John Fitzpatrick: Research based on e-bird

As Executive Director of the Lab from 1995–2021, I oversaw all aspects of the Lab’s affairs and conducted research as a professor in the Department of Ecology and Evolutionary Biology. Since stepping down from the directorship in July 2021, I am still closely involved in Lab affairs, and I am active in a variety of research projects, including my long-term project on the ecology, landscape genetics, and conservation of the Florida Scrub-Jay. I was privileged to grow up in rural Minnesota during the 1950s and 60s, where I fell in love with birds at a very early age. Several of my parents’ friends were birdwatchers, and one was even an avid bird-bander (Jane Olyphant). Our neighbor across the pond was a famous wildlife artist (Francis Lee Jaques) who became my childhood hero. I remain a passionate birder, and occasional bird-painter, to this day.

Doug Altshuler first studied world religions with a special emphasis on Vedanta philosophy at UC Santa Cruz (BA, 1992). He spent his third year at the University of Delhi. A field course in Guatemala and Belize sparked a deep passion for organismal biology. Doug's MSc (1996) research from Purdue University examined interactions among plants, birds and insects on Barro Colorado Island in Panama. His PhD (2001) research at the University of Texas at Austin concerned the influence of flight biomechanics on hummingbird foraging ecology and community structure. Lab work in Texas was combined with fieldwork in the Peruvian Andes and the Colorado Rockies. Postdoctoral research (2002-2006) at Caltech focused on aerodynamics and muscle physiology of hummingbirds, zebra finches, and honeybees. Doug has held faculty positions at UC Riverside (2006-2011) and the University of British Columbia (2001-present). Current research concerns the biomechanics and visual control of complex flight behavior.

(Associate Head, Professor @Department of Zoology at the University of British Columbia)

Why do species Multiply

Peter and Rosemary Grant have been studying Darwin’s finches on the Galápagos islands since 1973. The fieldwork is designed to understand the causes of an adaptive radiation. It combines analyses of archipelago-wide patterns of evolution with detailed investigations on two islands, Genovesa and Daphne. By integrating ecology, behavior and genetics, they have revealed how species are reproductively and ecologically isolated, and the causes and evolutionary consequences of rare episodic hybridization. Two mechanisms of speciation have been identified. In collaboration with other investigators, they have estimate phylogenetic relationships among the species of finches and their relatives, identified molecular mechanisms involved in the development of beaks and provided genomic details of evolution in contemporary as well as historical time. The research has been published in many research papers and three books, most recently “How and Why Species Multiply” (2008) and “40 years of Evolution” (2014). 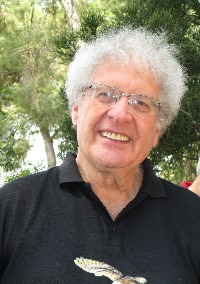 ALEXANDRE ROULIN
Full Professor @Department of Ecology and Evolution, University of Lausanne;
As a full professor at the University of Lausanne, my main scientific interests are (1) the evolution, maintenance and adaptive function of variation in melanin-based coloration and (2) social interactions inside the family (parent-offspring conflict; sibling competition). Being an evolutionary ecologist, my research group uses a wide range of methods from different fields, such as behavioural ecology, genetics, quantitative genetics, population genetics/genomics, population dynamics, etc. I mainly use the cosmopolitan barn owl as a model organism. Based on ecological research performed in this species, we recently started to expand our interest into molecular evolution and biomedical research.