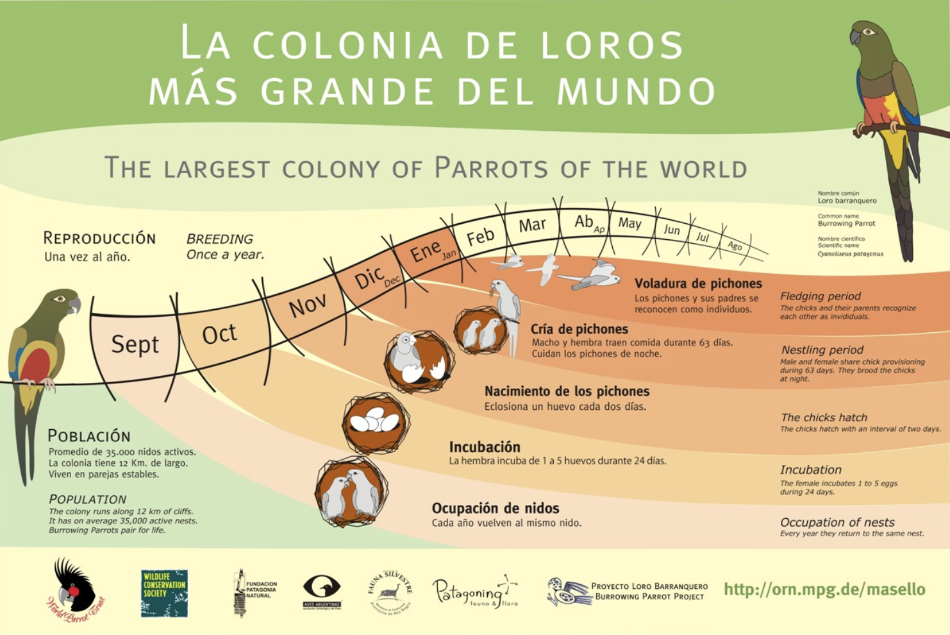 The Working Group Psittaciformes (WGP) started as the Parrot Researchers Group (PRG) during the 25th International Ornithological Conference (2010, Brazil). The group was appointed WGP of the IOU in 2013.

The Working Group on Psittaciformes
(parrots and cockatoos)

The mission of this group is to establish and promote research needs and priorities, with particular attention to regional conservation strategies to the parrots of the world. To achieve this, the WGP

3) Identifies and addresses barriers to effective research and conservation of parrots (Psittaciformes).

The WGP is characterised by a regional approach, being organised in four regions (African, Australasian, Neotropical, and Indo-Malayan), a Wild Parrot Veterinary Section, and a Secretary Office that coordinates joint work. The Co-ordinators of the regions and sections and the Secretary are elected by all members every four years. According to the Statutes and By-Laws of the IOU the officers are appointed by the IOU President, Prof. Dr. Dominique G Homberger (zodhomb@lsu.edu).

Since 2010, discussions, exchange of advice, and the coordination of joint projects have been carried out. The discussions can be freely accessed through our web page but registration is needed. If you are interested to join the group, please, write Dr. Igor Berkunsky or any of the regional coordinators (e-mails below). 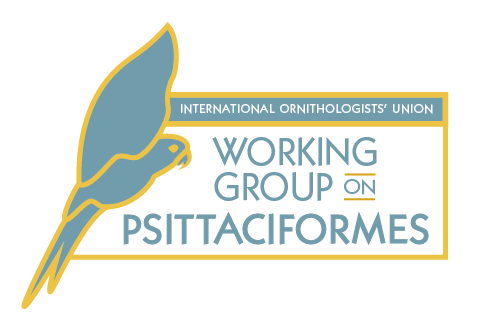 Each of the WGP regions and the Secretary Office are focusing their efforts on specific regional and global projects:

In 2014 a review of research and conservation priorities for the ‘larger’ parrot species of Africa and Madagascar (Genera: Coracopsis, Poicephalus , Psittacula, Psittacus) was published (Martin et al. 2014). A sister publication covering the ‘smaller’ parrots (Genus: Agapornis) is planned.

(1) Develop discussions from the side-meeting of the IOU-WGP Africa region at the 14th Pan African Ornithological Congress, over ways to facilitate the collection of distributional data on African parrots as well as collect samples (blood, faecal, feathers) to enable research in a variety of fields, including population genetics, disease and wildlife forensics

(3) promote coordination among research and conservation groups working on parrots in the region, through the development of conservation action plans, or working groups for particular species or issues (e.g. trade in wild parrots)

This region has been working on a review paper analysing the factors endangering birds in the region, focusing on evaluating the consequences of climate change on habitat loss and invasive species. The following scientific paper is the result of the work: Olah et al. (2018) Emu - Austral Ornithology, 118, 94-112, freely available at rdcu.be/bYmg6

For the period 2018-2022, we plan to follow the priorities outlined in our recent review covering this region (Olah et al. 2018), focusing on mitigating the main threats to the most endangered species. At the sub-regional level, we would focus on the following priority actions:

Australia, including its offshore islands, has 54 species of parrots, of which 15 are currently listed as threatened. We will continue our local on Critically Endangered Australian species. We also plan to do further conservation genetic research on Australian parrots, including whole genome sequencing and disease testing.

Invasive species present the most severe threat type to the parrots of New Zealand. We will continue to collaborate with colleagues from this region in monitoring the effects of predators and to protect the remaining parrot populations in the country.

The islands of Wallacea have 34 extant parrot species, of which 29% are threatened. Trapping was identified as a major threat in this sub-region. We will study the illegal parrot trade in Wallacea with forensic genomic tools in collaboration with colleagues from the Indo-Malayan region.

New Guinea is similarly rich in parrot diversity, with 46 native species, though only 7% are considered threatened. Many are poorly known, so we plan to gather further information on these species, and revise their Red List status.

5. Islands of the Pacific Ocean

There are 31 extant parrot species in the Pacific Islands, but nearly half (47%) are threatened with extinction. Conservation efforts will need to focus on eradication of invasive species from highlighted habitats. There are limited data for the parrots on most of the Pacific Islands, where research should be focused, with special emphasis on the threatened Vini species.

We will also involve audio-visual recording of our highlighted projects in the region to use them for education and awareness raising to the wider public (see more details at https://wildlifemessengers.org).

We are further planning to organise symposia and meetings for Australasian parrot researchers at conferences like AOC 2019, to form a stronger Australasian network and to promote collaborations and knowledge exchange.

Aims for 2014-2018: to 1) increase membership from this region; 2) get more literature on Indo-Malayan parrots into the WGP virtual library; 3) look out for funding opportunities to fund research work on parrots, particularly lesser known and declining species like the Nicobar parakeet (Psittacula caniceps), Lord Derby’s parakeet (P. derbiana) or Blue-rumped Parrot (Psittinus cyanurus) and also more widespread species like the Alexandrine parakeet (P. eupatria); 4) to complete a regional update of current threats faced by Indo-Malayan parrots.

3. Carrying out research to better understand the threats (wildlife trade and loss of habitat) and motivations behind them. Create change at the local level by providing means of sustainable income, empower communities to become stewards of these species and promote habitat restoration.

4. Clarification of the taxonomic status of potentially cryptic species complexes.

5. Capacity-building and establishing guidelines in the rehabilitation and release (and post-release) of rescued psittacines.

6. Enhance understanding of the status and risks of psittacine diseases/pathogens in the context of the parrot trade, and its implications for commercial bird markets as well as for rescued/released and native parrot populations.

10. Assessing the status and risks of psittacine diseases/pathogens in the context of the parrot trade.

This region has recently published the regional update of current threats faced by Neotropical parrots.

1. Coordinate with all researchers and members in the area to see what they are doing and what they are interested in doing together. Disseminate this information. Form a plan from this integration of other voices.

2. Support the formation of working groups for particular species to meet on email, facebook, or video conferencing. For instance, we need a specialists group for A. oratrix / auropaliata in Central America, and macaws in Central and South America.

3. Support the formation of a section of our group (across regions) dedicated to wildlife trafficking.

4. Support the formation of a section of our group dedicated to population monitoring techniques and plans on how to fill in holes and vulnerable areas.

1) Developing standardized and economically feasible screening and biosecurity protocols for confiscated and rescued psittacines being prepared for release,

2) finding solutions for the prohibitive costs of testing for disease,

5) collaboration, communications, consultation, training and open relations with all sections,

7) training and awareness with global wildlife rehabilitators and wild psittacines.

In the coming years, this section will concentrate its efforts in a worldwide project related to parrot reintroductions across wild Psittaciformes from all over the world.

In previous years, this section coordinated worldwide projects: the study of the presence of hemoparasites across wild Psittaciformes from all over the world, resulting in the following scientific publication:

The secretary office has also been working on the creation and maintenance of a virtual library. The library, available to all WGP members has been/is managed by Juan F. Masello (juan.f.masello@bio.uni-giessen.de), Martín Lezama, Dr. Virginia Sanz, Ron Britton, José Díaz Luque, Dr. Soledad Díaz, and Dr. Carlos de Araújo our current and former librarians. Additionally, job adverts are distributed through the WGP e-group on a weekly basis. Detailed information on the expertise of WGP members is available in our web page (for registered members).

Since 2010, the WGP closely co-operates with this independent group, particularly in the update of current threats faced by Neotropical parrots.

THIS SECTION HAS BEEN DEACTIVATED.

The aims of this region (2014-2018) were to 1) increase our understanding of the establishment, diversity and population dynamics of introduced and native parrot populations through our global parrot count, 2) get insights in the genetic make-up and adaptations of these populations in response to live in the new, often urban, landscapes, 3) apply ecological niche modelling to gain insight in the alien invasive potential of these populations and manage real or perceived agricultural conflicts. Additionally, we are planning to educate the public on these populations on a continuous and scientific basis.

THIS SECTION HAS MERGED WITH THE NEOTROPICAL SECTION (see bellow)